Federal Member for Indi Helen Haines MP was last week briefed by Better Benalla Rail on issues surrounding ARTC plans for Benalla Station. She was accompanied by two staff members and provided with extensive background material outlining the case developed by BBR. It was a thorough and detailed briefing.

Helen has been aware of community concerns about rail issues for a long time.

She now understands that there is a need to rebuild trust between community group Better Benalla Rail and the ARTC and hopes the (Benalla) Working Group will help achieve this.

BBR remains sceptical because of long standing community feeling connected to the demolition of part of Benalla Station building and more recent lack of communication and transparency.

Ed Walker, Victorian Manager ARTC, wrote (Ensign letter to the Editor 29 July) that “we are not furthering existing designs until we have had the opportunity to work through the options in a structured process with the community”.  There were no plans.

This is contradicted by actions of Veris who have been contracted by ARTC and were measuring and marking for an overpass over two weeks at the end of June.

Beside Ed Walkers letter was an advertisement advising the ARTC had made a submission under the Environment Act seeking approval for proposed works. This July 29 advice allowed ONE WEEK for public comment, a massive task requiring reading of a huge submission and a complex act. Even if the working group were in place by the end of July as intended, they would not have had time to digest the associated Federal Act and ARTC referral document so that they could make a comment by 5 August.

After digesting the complex issues involved, Helen has undertaken to contact the Department of the Deputy Prime Minister Mr McCormack, the Minister responsible for the ARTC. She advised she had had previous discussions with staff in his office.

She understood that there is a blurring of detail that does not clearly separate the Inland Rail Project and North East Rail Upgrade, because both are promoted by ARTC (Australian Rail Track Corporation) and often together.

Do the spin doctors from the ARTC think the population is so dim they won’t spot what might appear to be a bit of bribery? Two side by side articles appeared in the Benalla Ensign, one outlining the community concerns regarding the ARTC plan for Benalla station, the other article outlining a $4000 ARTC grant to the Benalla Tomorrow Today Foundation.  Similar grants have recently been provided to the Winton, Baddaginnie and Goomalibee Fire Brigades.

Is this the ARTC version of the recent federal “Sports Rorts” scheme? Targeted grants to make the ARTC look like good corporate citizens and seeking to undermine any community opposition in NE Victoria to their Inland rail plans?  The Benalla community are told by the ARTC that funding will not allow for the sensible local proposal to relocate 1.3kms of the XPT line. But funding to soften up local opposition seems abundant, judging from their invitation for groups in NE Vic. to apply for grants.

All fire brigades deserve to be fully funded and equipped to perform their valuable services, but this should not be dependent on a system of targeted grants from a government corporation with a real agenda.

Save our Station campaign intensifies

A summary report from Better Benalla Rail has been sent to Deputy Prime Minister Michael Mc Cormack regarding the Inland Rail plan and to the Chairman of the Australian Rail Track Corporation board, Mr Warren Truss. The document outlines the issues and options the Benalla community has regarding the ARTC plans to create a huge 10 meter “Mt Benalla” rail overpass off McKellar St.

Compiled after extensive discussion and feedback from the community and local experts, an alternative straight throughdesign is outlined in the report, and the multiple benefits for both freight and passenger services comprehensively detailed.

BBR Spokesperson Suzie Pearce announced these actions today, stating the report has previously been forwarded to State Minister for Planning, Richard Wynne. Mr Wynne’s department is currently considering an application from the ARTC seeking state approval for its plans.  Jaclyn Symes MLA, Minister for Regional Development and Jacinta Allen MP, Minister for Transport Infrastructure have also been approached for their support at the state level.

Suzie said “This is just the beginning; our report has been prepared very carefully. We take pride in the detail and accuracy we have incorporated into it, and we are confident our proposal is not only functionally superior but may well be the cheapest solution”. She said, “What we are asking for is what the ARTC initially claimed they wanted – an outcome we can all be proud of.”

Better Benalla Rail have an upcoming meeting to brief the Member for Indi, Helen Haines, so she can represent the community’s concerns when federal parliament resumes.

A copy of the report can be found on the "Resources" page.

"Think of the paralysis of intellect that gave that idea birth."

Why are our rail systems so disjointed – was it by accident or design?

The Palace letters have ignited interest in a tumultuous period in Australian history. One previously unexplored aspect deals with the reasons behind the complete dysfunction that dictated our approach to rail track gauge.

As Mark Twain, the great American author remarked after changing trains at Albury/Wodonga due to differing gauges: “Think of the paralysis of intellect that gave that idea birth.”

Some light is shed on this in a recent article by Matthew Ehret in Strategic Culture which explores a number of key policies of the Whitlam Government. In one point he notes “Large scale urban renewal programs were launched extending modern sewerage systems to all urban centres, while new roads, rail, electrification and flood prevention programs were built. Highways linked Australia’s capitals for the first time and standard gauge rail was established to accelerate continental development strategies (whether Africa or Australia, the British Empire never permitted common rail gauges in order to prevent internal development while keeping its “possessions” reliant on maritime trade). (My emphasis)

What an astounding concept, deliberately keeping the ‘colonies’ underdeveloped to permit Britannia to continue to rule the waves and dictate our trade.

Today we are still attempting to resolve the damage these policies caused. Indeed, it would appear that our Victorian rail infrastructure has been allowed to decay to a point where increasing numbers of commuters are abandoning rail due to its unreliability and the discomforts rough tracks impose on travellers. We could be forgiven for thinking VicTrack has abandoned commuters and allowed the needs of ARTC freight to dominate the system.

The full article in Strategic Culture can be found at this link:

Badly informed or designed to mislead? 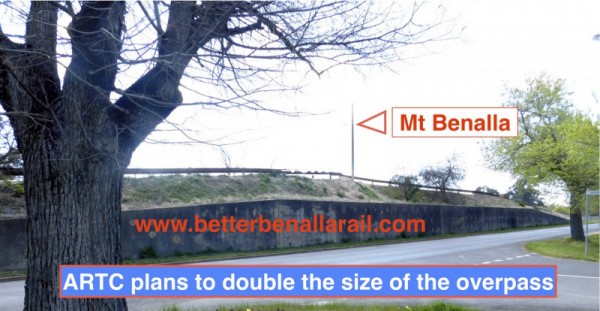 Badly informed or designed to mislead?

This week the Prime Minister announced a $1.5 billion funding package for small priority projects, including rail. Better Benalla Rail called on Council to investigate the possibility of accessing funds to ensure a satisfactory outcome for the redesign of Benalla railway station. An ARTC “spokesperson” was quick to claim this funding package “would not cover this type of work”.

An ARTC spokesperson told the Ensign this week: “Relocating the railway line would require significant works that far exceeds the scope and budget of the Inland Rail project. While it may appear to be a relatively straightforward solution, our investigations show that it would require complex track work, a major signalling upgrade, additional platform and pedestrian connecting and cost significantly (up to four to six times) greater than replacing or removing the existing overpass”.

·      “the scope of the project” – Code for how the ARTC aim to get freight through Benalla as cheaply as possible.

·      “the budget” – Announced as ten million for Benalla by ARTC representatives at an early public meeting, ARTC last year claimed the Better Benalla Rail plan would cost $40 million and this year claim it could cost $60 million. Our requests for details remain unanswered.

·      “major signalling upgrade” – Benalla residents, and railways staff, are well aware of the existing signalling faults and consequent disruptions. These faults need to be fixed whatever the stations final solution.

·      “additional platform” – Benalla can, and sometimes does, operate with one platform only, simple “crossovers” permit this.

If the ARTC insist that funding limitations are the reason we must accept their inferior station redesign, a giant Mt Benalla, they should support our efforts to gain additional funding.

How the Station once looked

This image was created to illustrate how access would be so much better  and safer with the XPT line relocated. This is how the Station originally was designed. This would be the view from around the Victoria Hotel. 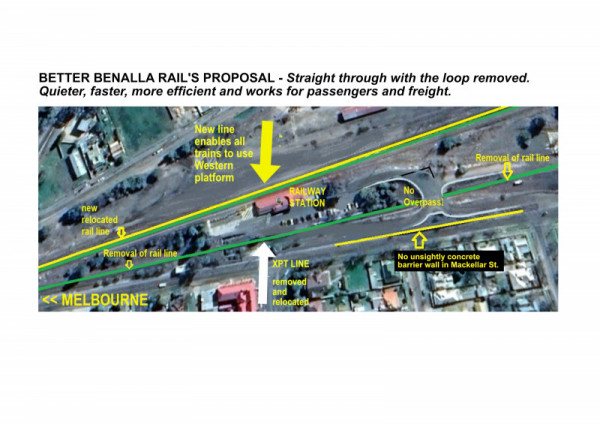 “A rule of government is never look into anything you don’t have to, never start an enquiry unless you know what its findings will be.”

From the Yes Minister episode “The Whiskey Priest,” December 16, 1982.

Expect to see Australian Rail Track Corporation ads in local papers soon as their Public Relations team move to establish a Benalla Rail Working Group. Similar to the group established in Euroa last year, the ARTC will be calling for nominations from Benalla people with an interest in rail.

"Scary on a dull winter morning". 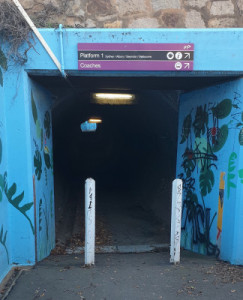 Better Benalla Rail asks people to complete a "Conversation Card" (See Your Opinion). Some comments from the cards are below, the same themes emerge continually.

"The tunnel walk under the rail line nearly always has a light not working. No one claims responsibility. A larger overpass would completely destroy the station area. It needs to be user friendly".  Benalla resident.

"No overpass, rail line moved to open up the station for easy access for everyone".  Benalla resident.

"More car parking space, not less. Access to car park from McKeller Street, like it originally was". Benalla resident.

"A functional and aesthicically pleasing environment with easy parking off street". Benalla resident.

"Benalla Railway is a vital part of human access to public transport. I do not want the much needed passenger access removed, hindered or down graded in any way. Actually passenger access NEEDS TO BE INCREASED. I am disgusted that freight and further infrastructure to increase freight, takes priority over passengers. The VERY PEOPLE, THE TAXPAYERS, who once again are being denied"  Benalla resident.

"Easier access not added difficulties for pedestrians as well as cars"  Benalla resident.

Not the most inviting.

It has been reported that a professional report on the "access tunnel" has been undertaken this week. We will see if the people of Benalla can be permitted to read it when completed. It is understood this was the result of Benalla residents meeting with the Human Rights Commission and respresentatives of V/Line and VicTrack to discuss serious concerns about station access for disabled people.

Another view of the historic tower. 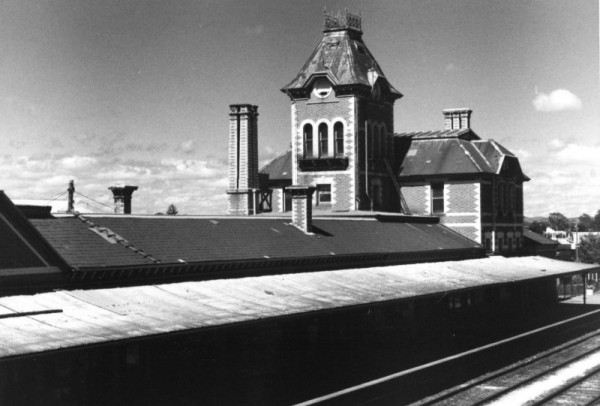 It is reported that it was possible to see the snow on the mountains from the top of the tower. A splendid dining room below was also lost when this was all demolished to make way for a car park.  Some have suggested there was a clock in the tower, but this is probably not the case. This photograph by John Collins taken in 1973 shows a circular area, which may have been mistaken as a clock. From the files of the State Library of Victoria.

There are real dangers that current ARTC plans for Benalla Station will make the station even less user friendly.

Good design - why it matters.

"The Office of the Victorian Government Architect (OVGA) is a leader in enhancing the quality of built environments in Victoria.

OVGA provides leadership and strategic advice to government about architecture and urban design and promotes an awareness about how good design can make great living places and urban environments."