Better Benalla Rail proposes a number of alternatives to the ARTC plans for the Benalla Rail Station. These proposals can be viewed by downloading or opening online our listed PDF files.

Better Benalla Rail recently briefed Federal Member for Indi Helen Haines MHR and her staff. A comprehensive range of background material accompanying our BBR proposal was provided. Helen advised she had already been in contact with the Ministers office regarding the Inland Rail project. She has undertaken to raise our proposals with the Minister’s office while in Canberra.

Local State member Steph Ryan MP had previously written to the Deputy PM about Benalla’s concerns, and his reply to her contained the standard ARTC objections that our “proposals would require complex track work....and cost four to six times more.” These ARTC claims have been refuted by us with a detailed explanation, a copy of which has been forwarded to Steph and Helen Haines.

Extracts from the letter and our response can be found here: BBR latestnews Euroa – Glenrowan - Wangaratta - Benalla

Two ground breaking meetings have been held with representatives from Euroa, Glenrowan and Benalla, all of whom face the same huge “overpass” solution favoured by the ARTC. We are developing common ground and opportunities for joint action. Representation from Wangaratta is being explored. These discussions have revealed that the Euroa and Glenrowan communities are far from happy with the ARTC plans. It was noted that the ARTC manage to find a couple of isolated voices of support in each town. We expect the same to happen in Benalla.

Membership of the “Benalla Working Group” has been selected by the ARTC and set for the firstmeeting on September 21 . We found the experiences of the Euroa group most informative. The minutes of the Euroa meetings can be found here. euroa-working-group

The growth of community support continues, with the Benalla Liberal and Labor Parties indicating support for our objectives. We are currently seeking a meeting with the National Party.

Since the May Newsletter we have completed a comprehensive report detailing a range of issues related to the ARTC’s plans for Benalla Station. This report has been forwarded to politicians and senior bureaucrats with a stake in Inland Rail. The report can be downloaded here.

The State Governments role in what happens to our station remains opaque. It seems there is a reluctance for them to become involved, in spite of VicTrack being the effective owner of the infrastructure on behalf of the State Government. We are developing approaches to ensure the State Government is not allowed to avoid its responsibilities to rail commuters.

Council elections approach. No candidates meeting seems likely, so sitting Councillors may be advantaged. Nominations open on the 17th September, with elections completed by October 24th. Mail out information is planned for early October. We are watching this carefully, as the next Council will play a vital role in future outcomes for our station. Our Facebook page is posting material submitted to us by candidates. Facebook

The Covid lockdown has restricted our ability to open the “Pop Up Shop”. Our fundraising plans were based on selling the SOS T-shirts we have produced, so lack of funds has made it impossible to proceed with our planned letterbox drop of Benalla. A brochure is ready if funds become available.

You can donate to Better Benalla Rail through our NAB account. 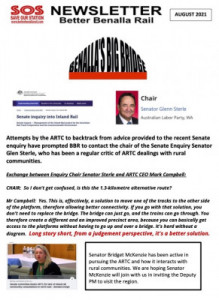 The Australian Rail Track Corporation (ARTC) plan to run 1.8 km long, double-stacked freight trains from Brisbane to Melbourne. They will use the XPT standard gauge line in North East Victoria. This will require major changes to several station precincts, including Benalla where these trains will not fit under the existing overpass.

Benalla Station has been fraught with access and safety problems since the installation of the Sydney to Melbourne passenger XPT line in 1962. The installation of a 4-metre-high traffic overpass and small, dark, unsafe and flood prone pedestrian underpass were poorly designed. Today this underpass does not meet code standards for any user including the disabled (Equality Act 2010 replacing Disability and Discrimination Act 1995).

For nearly sixty years Benalla Station has endured inadequate public access with minimal carparking, no taxi rank, and an insufficient and unsafe bus turning area, now utilised by up to 40 coaches per day. Emergency service vehicles are not catered for at all.

The XPT line and passenger platform are well away from the main station platform which creates additional safety problems when pedestrians, coaches and cars all use the same confined space.

The XPT platform is too narrow and three carriages too short for the train necessitating that it stops twice. The step between train and platform is considerable. Many passengers, especially disabled, elderly and families with small children and baggage find this concerning and dangerous.

The ARTC now plan to also use this XPT line for transiting their long, high freight trains through Benalla and this would require a higher overpass.

The ARTC plan is to build a new 10-metre-high overpass, with access ramps running parallel to Mackellar Street. These ramps would be twice the existing configuration and have a 3m high concrete retaining wall. Alternatively, ARTC claim they would build a pedestrian only passenger underpass for access to the station but no details have ever been presented to the community.

Both options would compound the existing problems of access and safety by decreasing already limited parking and not resolving taxi and coach problems. Pedestrian access would be more difficult as car parking would be further away in residential streets. The visual amenity of the surrounding flat streetscape would be greatly impacted.

The Inland Rail project provides an opportunity to fix the long-term problems at Benalla Station benefiting both freight and passenger needs.

The obvious and most simple solution is to relocate 1.3km of the standard gauge XPT line from one side of the Benalla station to the other. This would allow both lines to be on west side of station requiring one more crossover at each end of yard and no overpass.   The new section would rely on crossing onto the standard gauge VLine track, already leased by ARTC, and using a small section of the Oatlands Line.
This will negate the need for a new overpass, allow demolition of the existing overpass and enable direct vehicle and pedestrian access to the station as originally designed.

It would improve parking, allow taxi facilities and resolve coach parking and turning problems. Reclaiming and landscaping the XPT line area would provide a sound barrier and create an attractive environment.

Importantly, it would enable freight trains to travel on a dedicated freight line straight through Benalla rather than use the existing loop. This would be quicker, safer and quieter.

It would also allow the main platform at Benalla Station to be used by all passenger trains whether traveling north or south because there is no conflict caused by timetabling.

The ARTC claims, without substantiation, that budgetary considerations will not permit this solution due to signal adjustments and their assertion that a new station platform would be required. Better Benalla Rail disputes these claims.

Is it reasonable that Benalla residents be expected to accept an even more inferior station just to accommodate freight progress?

The Benalla community believe their alternative proposal will meet freight needs. It would be a potentially cheaper, more cost-efficient option that also offers improved on-site shunting opportunities. Most importantly it would restore the amenity of Benalla's historic 1883 station precinct.

The environmental issues listed in the ARTC Report (The Inland Rail Tottenham to Albury Project Consultation summary report 2017- Sept 2019) do not even address the major issue of flooding.

In the disastrous 1993 Benalla flood, the existing overpass acted as a 'dam wall' which impeded the flow of water. Waters entering Benalla from the north were unable to disperse and banked up behind the wall. This increased both the height and duration of the flood and caused inundation of many homes. The XPT eastern line was flooded but none of the western lines.

Subsequent reviews of this flood event recommended major drainage tunnels be built under the railway lines to correct this man-made problem.  Only minimal action on these recommendations was ever undertaken.

The ARTC plan will double the length and height of the overpass and its supporting wall. The plan does not provide for emergency services vehicles in the event of a future flood, fire or rail accident.

The Community Consultation claims by the ARTC (The Inland Rail Tottenham to Albury Project Consultation summary report 2017-Sep 2019) are significantly overstated and misleading.

The ARTC claims to have undertaken consultation with stakeholders to understand local needs and design options in Benalla. In fact, Benalla Rural City Council was not even briefed until November 2019 following Benalla resident group Bobcar calling a public meeting in Sept. 2019.

The September meeting was attended by an ARTC representative, some Councillors and sixty residents. The impact of the proposed new overpass was made clear. Bobcar also presented the alternative plan involving relocation of a small section of track that would negate the need for any overpass in Benalla.

Since then lack of forthcoming information or transparency by ARTC has led to the formation of a dedicated community group Better Benalla Rail (BBR) taking over from Bobcar and the initiation of a local Save Our Station (SOS) campaign.

BBR provides the community with accurate information and a platform for being heard through the webpage http://www.betterbenallarail.com,  the Better Benalla Rail for Benalla Facebook page and Save Our Station campaign shop at 81 Nunn Street Benalla.

Mistrust by the community in ARTC is exacerbated when ARTC fails to even list Better Benalla Rail as an interested party or stake-holder group.

The ARTC Stakeholder Lead has only this month called for nominations to form a Benalla Working Group to find a solution within the scope and budget of the Inland Rail project. However, given that contractors are already measuring up for the new overpass there is community concern this will be but a token consultation.

The current revival of interest in rail globally can provide an increased economic benefit for Benalla. As a major station on the Sydney/Melbourne route, Benalla has an impressive history and a strong claim to being the gateway to North East Victoria.

Benalla's proximity to Melbourne allows for promotion of tourist day trips and increased desirability as a retirement hub as well as being within commuting distance for flexible work from home arrangements.

To realise this potential, an attractive, accessible and functional passenger railway station in the township of Benalla is essential.